Studying history allows us t grasp meaning, ideas, and science behind the law of attraction. Aside from that, we will be able to identify people who have a significant contribution to this discipline.

The History of The Law of Attraction and Important Authors

The word “Law of attraction” appeared for the first time in print in the year 1877. It was found in the book written by Helena Blavatsky, a Russian occultist who write a book about the attractive power that exists between the elements of our spirit. She was one of the most significant authors that play a crucial role in the development period of this principle.

“The Universe is worked and guided from within outwards.” ― Helena Petrovna Blavatsky

In 1886 -1887, Prentice Mulford, one of the important figures in the New Thought thinking, write an essay about “The Law of Success.” He is considered as the first articulator of the law of attraction a general principle, and was followed by other new thought writers like Henry Wood, “God’s Image in Man” in 1892, and then Ralph Waldo “What All the Worlds A-seeking.”

Recommendation to read: Thoughts are Things

“to say a thing ‘must be’, is the very power that makes it” ― Prentice Mulford

In the early 19th century the New Thought movement grew based on Phineas Quimby’s teachings. Even though Quimby had tuberculosis, his intense excitement riding a horse, gave him temporary relief from pain. He realized the power of his mind versus his illness. Although he never mentions the word law of attraction, he diligently studies the “Mind Over Body.”

His Complete Writings and Beyond

“Disease is the misery of our belief, happiness is the health of our wisdom, so that man’s happiness or misery depends on himself.” – Phineas Quimby

In 1906, William Walker Atkinson released a book for the New Thought movement titled “Thought Vibration or the Law of Attraction in the Thought World.” Here he comprehensively talks about the power of love, manifestation, energy, vibration, and thought.

“Desire firmly, confident, and earnestly. Be not half-hearted in your demands and desires – claim and demand the WHOLE THING, and feel confident that it will work out into material objectivity and reality.” ― William W. Atkinson

Another famous and vital author of the 19th century is Thomas Troward, also known as the “Mystic Christian.” He is considered as one of the influencers of the book of “The Secret.” He emphasizes the learnings we can get by combining a wide range of spiritual traditions.

This is a must read: The Power in You

“My mind is a center of divine operations.” ― Thomas Troward

In 1910 Wallace Delois Wattles got famous. His book “The Science of Getting Rich.” It creates more attention and interest in the law of attraction, and some of his lectures emphasizing on precise techniques that you can use to manifest. He is encourages people to use powerful creative visualization in manifesting desires.

“By thoughts, the things you want are brought to you; by action, you receive it.” ― Wallace D. Wattles

He used the word “Law of Attraction” multiple times in his book “The Law of Success in 16 Lessons”, the released the year 1928, and his book “Think and Grow Rich” became a best selling book worldwide. Napoleon Hill emphasizes how negative thinking attracts negativity in life as well. He encourages the readers to live life with purpose and that you believe in your potential to manifest all your wants. now then transform those plans into your reality. In the beginning, as you will observe, is your imagination. ” – Napoleon Hill

Book Recommendation: “The Secret” Book Review and How it All Started

She introduces and popularizes the use of affirmation, and explains the power of self-love and self-concept that boosts your ability to manifest.

“Every thought we think is creating our future.” – Louise Hay

He introduced the principle of non-resistance, and how we can attract things when we actively give our energy into trying to resist it.

“We attract things when we actively put energy into trying to resist them.” – Richard Weiss

21st Century – Renewed exposure to the law of attraction

Her book “The Secret” becomes a worldwide phenomenon. It sold out millions of copies. Wallace Wattles’s book serves as her inspiration for writing her book. It was first released as a movie a few months after the book came out. It is a combination of different law of attraction teachings and writings in one book. She wrote a follow-up book in 2010 called “The Power,” where she discussed the power of love in attracting your dreams.

If you want to find out more about the book, check out this review:“The Secret” Book Review and How it All Started

“Always be grateful for what you have right now. As you  think about all the things in your life you are grateful for, you are amazed at the never-ending thoughts that come back to you of more things to be grateful for.” – Rhonda Byrne

The Law of Attraction Future

As the years go by, more people become interested and who practices the law of attraction. There are books from different authors that were publish teaching various techniques and principles on how to manifest your desire and live an abundant life. Expect that there will new authors who’ll release new books that will broaden our understanding of the law of attraction, and there will be new techniques formulated in creating manifestations. New guides become very accessible with the use of technology to reach out to more people.

How The Law Of Attraction Works For You

Understanding the history of the law of attractions helps us to discover how it started and how new teaching and techniques were added to better manifest your desire. Thanks to all book authors and practitioners who share their knowledge and experiences using the Law of Attraction. Resources are everywhere, which means anytime you can start to practice it. It’s never too late to begin manifesting your desire. It was even one click away to start your law of attraction journey.

Start manifesting your dream and start creating your history that you’ll cherish forever. 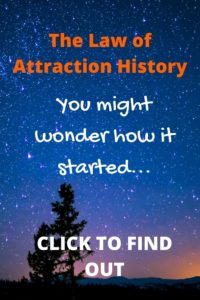 10 Areas of Life to Set Goals to Achieve Happiness

If you think you are struggling in achieving the life that you desire, you might forget…

How the Law of Attraction works through Vibrational Alignment

Vibrational alignment is one of the key principles in the law of attraction. Anything in the…

The Law of Attraction possesses vital components that can help your kids build a rewarding future.…